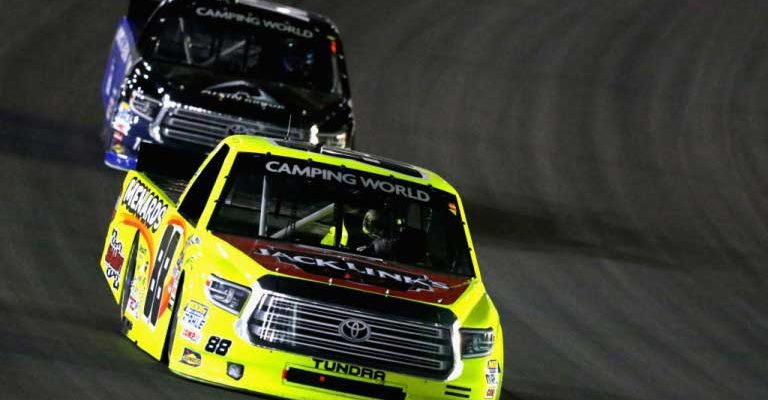 Matt Crafton, driver of the No. 88 Jack Links/Menards Toyota Tundra made his 19th career start at Kentucky Speedway in Thursday night’s rain-delayed NASCAR Camping World Truck Series (NCWTS) Buckle Up In Your Truck 225. Starting fourth, when qualifying was canceled due to weather, and the field was set based on the rule book – 2017 owner points – Crafton ran as high as second in Stage 1, and finished third. Unfortunately, the 2015 Kentucky Speedway race winner suffered damage to the right side of his Menards Toyota Tundra following a lap 43 incident in Turn 3, involving two of his teammates. Carl “Junior” Joiner brought the No. 88 machine down pit road multiple times under caution, to repair the damage, and Crafton would restart from the 22nd position at lap 51. At the conclusion of Stage 2, at lap 72, Crafton was scored in the 12th position.

Although the two-time NCWTS champion complained of a slight vibration, and a “tight in the center of Turns 3 and 4” condition on his Toyota Tundra, the ThorSport Racing driver showed speed throughout the final Stage, running inside the top-10 for the remaining 74 laps. Crafton would cross the stripe in the eighth position behind race winner, Christopher Bell.