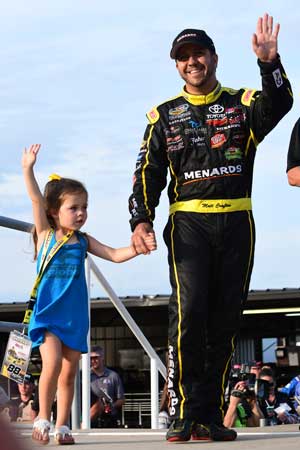 Matt Crafton, driver of the No. 88 FVP/Menards Toyota Tundra made his 14th career start at at Gateway Motorsports Park (GMP) in Saturday night’s NASCAR Camping World Truck Series (NCWTS) Drivin’ for Linemen 200. Starting sixth, the ThorSport Racing driver finished third in Stage 1, and second in Stage 2. Utilizing pit strategy, Carl “Junior” Joiner opted for fuel only during a green-flag pit stop late in the 160-lap event. After pacing the field twice for 16 laps, Crafton brought the field to the green on the final restart of the night, but would lose valuable track position on old tires, and settle for a fourth-place finish behind race winner, John Hunter Nemechek.

What happened at the end of the race?

“Those guys just took two tires, and I was on no tires. You win some, you lose some. Everybody is upset, but at the same time, they knew we were here tonight.”