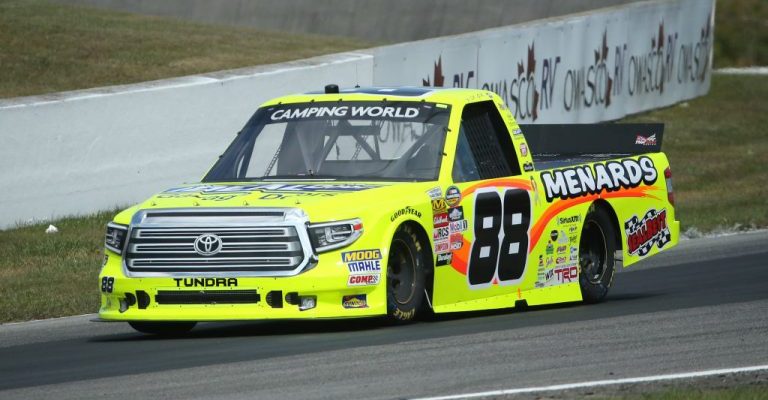 Matt Crafton, driver of the No. 88 Ideal Door/Menards Toyota Tundra made his fifth career start at Canadian Tire Motorsport Park (CTMP) in Sunday’s NASCAR Camping World Truck Series (NCWTS) 250. Starting eighth, the ThorSport Racing driver struggled with handling on his No. 88 machine throughout the 64-lap event, reporting early in Stage 1 that his Menards Toyota Tundra, “lost all handling – it’s plowing down the hill, loose on right-handers, and tight on left-handers,” as he began to lose ground to the race leaders. Running consistently inside the top-12 through the first 10 laps, Crafton made contact with the 02 truck, and was forced down pit road at lap 14, due to a potential flat tire, and credited with a 20th-place finish in Stage 1.

Restarting 11th in Stage 2, due to pit sequence, the Menards driver ran consistently inside the top-10 through the ensuing 19 laps, until coming to pit road late in the Stage for a scheduled stop. Crafton would be credited with a 12th-place finish in Stage 2. Unfortunately, trouble continued for Crafton early in the final Stage. With less than 20 laps to go, the two-time Champion was forced to bring his Menards Tundra to the garage, and the No. 88 team was credited with a 25th-place finish, due to an expired engine in the fifth annual event.